During your next trip by train, you might experience for the very first time the real potential of the hydrogen energy and it could have a taste of coffee. If you order a coffee or cappuccino from a mobile minibar from Elvetino in a train from the Swiss railway company (SBB-CFF), you might have the chance to be in front of the first hydrogen application for the general public at a country scale. This application has been presented on April 4th 2014 in Zurich and will be implemented on Monday April 7th 2014.

This minibar must have enough on-board energy to go through rush hours and is powered in electricity with a fuel cell. The battery version suffered like our electric cars from an autonomy issue.

The CEKA company supplied the fuel cell and realized the integration. Hydrogen comes from MAHYTEC’ solid storage systems and is one of the key point that made this unprecedented application comes true. It was actually not possible to embark pressurized tanks for this application which rolls from wagon to wagon in the middle of a dense public transported at high speed.

MAHYTEC’s technology allows to concentrate high rates of hydrogen in a tank containing what could be referred as a hydrogen sponge, a hydride, able to store hydrogen at a pressure barely higher than a tire one, i.e. less than 3 bars and at room temperature. Further than just releasing the hydrogen it contains, the tank must be able to hold an efficient dialogue with the fuel cell in terms of heat exchange in order to create electricity.

It is, of course, the hydride that the company synthetizes in its own factory but also the mastery of the capacity of the tank to absorb heat which makes MAHYTEC’ solid storage systems one of the most performing storage solutions on the market for mobile and stationary applications, as it has been attested in the series of tests which convince CEKA and Elvetino to use it.

Besides its high level of performance, the tank must also meet the requirements defined by international standards for robustness and safety. All tests were successfully passed and the tank proved its resistance to falls, fire or extreme temperatures.

A first round of 26 minibars has been realized, what means 80 tanks were delivered by MAHYTEC in the end of 2013. Thanks to a dedicated refilling facility implemented in some train stations by Pangas (a subsidiary of gas company Linde), tanks will go from one minibar to another by always guarantying a coffee at the perfect temperature. In the future, new orders will follow and other countries might experiment this application, whose offer could be enlarged due to its electrical power autonomy, by offering for example hot and cold beverages, ice creams and hot meals, what a non-hydrogen product would not be capable of. 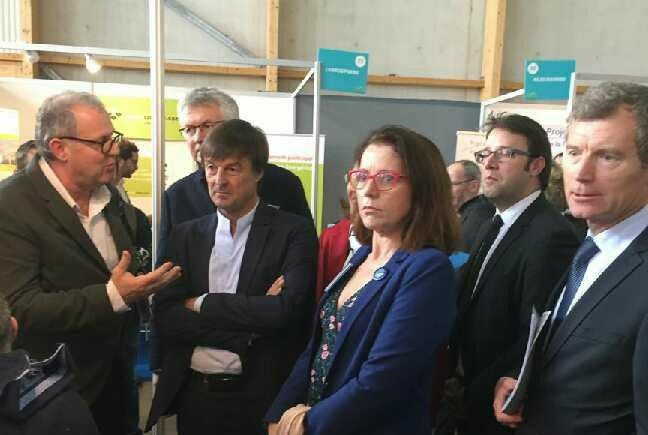 28 November 2017
The Minister of Ecological and Solidary Transition Nicolas Hulot visited our booth on the Breizh Transition fair. Dominique Perreux has presented our solutions dedicated to hydrogen energy and in particular our complete solution for energy autonomy SECURITHY. The Minister reaffirmed its position on the potential of hydrogen as an energy carrier, as it was said [...]
Articles 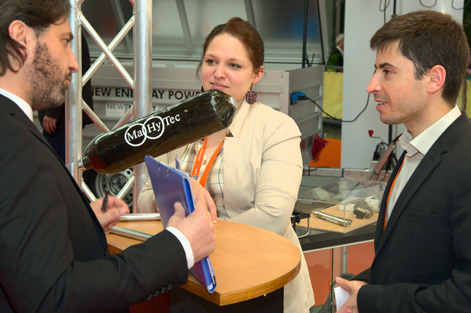 MAHYTEC will exhibit its hydrogen storage solutions in the Hannover Messe

7 April 2016
For the fifth year in a row, MAHYTEC will take part to the Hannover Messe in a group dedicated to hydrogen, fuel cells and batteries. From April 25th to April 29th 2016 will be held the Hannover Messe, Europe’s biggest industrial fair. MAHYTEC booth is in Hall 27, on the “Pavillon Business France” in the [...]
Non classé 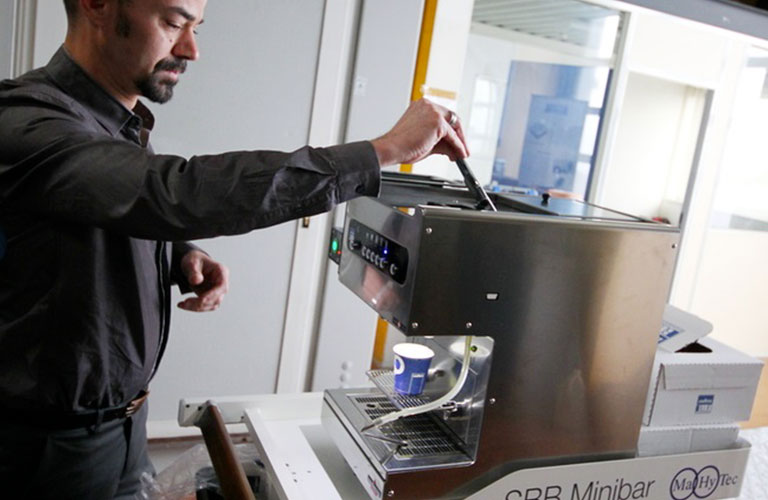 6 April 2016
MAHYTEC’s hydrogen tanks power the first use of hydrogen for the general public at a country scale During your next trip by train, you might experience for the very first time the real potential of the hydrogen energy and it could have a taste of coffee. If you order a coffee or cappuccino from a [...]

« MAHYTEC moves to the industrial stage

MAHYTEC will exhibit its hydrogen storage solutions in the Hannover Messe »